My "Happy-Buy" in this NYC Trip... ChromeBook

This is one of the rare few items that I had the urge to buy... :)
It's not because I am a fan of new electronics stuff, which most of my friends knew or those who do not know me so well assumed that I do :P One of the 'evidences' is I only own my iPhone 4S after almost 6 months after it was released; and I think probably I'll 'skip' the next couple of 'versions'/'models' before I move on to another one.

I don't have an eye for electronics, and I hardly go for the latest... the "buy" is largely derived from "needs"; and even if it's a "want", it's after much thinking... and certainly, I'm never one of those who would line up outside the store for any new release :)

The Chromebook, on the other hand, has caught my attention when it was first introduced by Suan Yeo in one of our discussions in the school. Definitely, in terms of weight, it does not qualify if one is looking for portability. In terms of look... hm... it looked like a normal notebook. So, not attractive, right? In fact, it was 'lacking' to a large extent, for those who likes to work with applications in the computer.

On the other hand, I guess it's the simple and minimalistic feature that caught my attention - of course, not for my personal use, but for my nephew and even possibly my parents - people who do not require much computing power, but just to surf the web! That's beautiful isn't it? It saved us the hassle of making sure the latest anti-virus software to be updated (when you talk about everything's in the web); and another feature I like most is... I'm free from the hassle of upgrading the OS all the time - the different versions of Windows, or the different 'animals' (in the Mac OS)! This, in fact, is the greatest 'draw' :)

Unfortunately, such device is not available in the Singapore store. Haiz... and probably will not be shipped over to Singapore (owing to the fact that it's an electronic item that comes with battery). Actually, I learnt that it's not easy to get it in US too... But, thanks to Aurelius who actually hunt the Chromebook down - at "Best Buy"... I guess, it's my happiest buy in this trip... not that I've gotten something ahead of others, but it's something that I see is designed to suit the needs of a specific group of users very well.

Chromebook could be the trendsetter of how most users are going to behave (moving into cloud) in the near future; I still believe that non-cloud devices are still here to stay. Basically, it serves a growing niche of clientele. 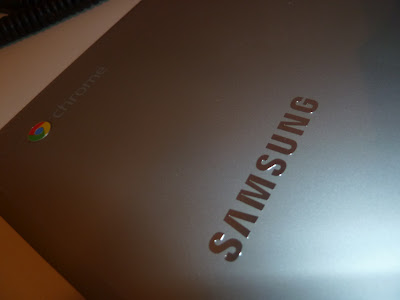